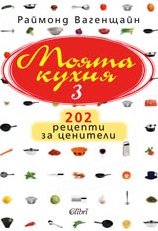 “My cuisine 3” comprises the both - “My cuisine” and “My cuisine 2”, but many of the recipes have been improved and also have been added new recipes.

Categories
Free TimeCuisine
About the Author

Raymond Wagenstein has worked – for fifteen years – as a film critic, journalist and script-writer. He has wrote a few hundred articles and reviews. Since 1990, he is a manager of the Publishing House “Colibri”. For many years he has been a director of the Sofia International Book Fair and Bulgarian Bookpubkishers’ Assossiation.

The cookery is his hobby. The both culinary bestsellers of his - “My cuisine” (1996) and “My cuisine 2” (1998), had a great success and for a long time had became a bibliographical rarity.

This book has been awarded with the distinction “Best Book About Regional Cuisine” given by the prestigious International Foundation “Gurman” with a head office in Madrid. Raymond Wagenstein has also published a book about Bulgarian national cuisine in France.

The Miracle of the Oat Bran
Pierre Dukan

Key to the Health of Your Child
Choy En Jun

Being Young at All Ages
Nadia Volf