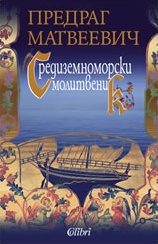 It is difficult to define the literary genre of that great book about the Mediterranean – it is both poetic and scientific encyclopedia of the material and spiritual culture of the Mediterranean, a historical reader, an etymological dictionary, an epic poem about eternal beauty of the sea, a breviary.

The book was a bestseller in many European countries. It has been reprinted many times and was translated into more than twenty languages.

“Mediterranean breviary: A Cultural Landscape” was awarded with: "Best foreign book in 1993" in Paris; The European Award "Charles Veyon" in Geneva and some awards in Italy.

Predrag Matvejević (1932) was born in Mostar, ex-Yugoslavia (today – Bosnia-Herzegovina). His father is Russian, his mother is Croatian and he is a naturalized Italian citizen. And probably exactly that innate cosmopolitanism of his makes his famous production – “Mediterranean breviary: A Cultural Landscape” (1987) – so universal. This book has been reprinted many times and was translated into more than twenty languages. In many European countries, it was a bestseller.

Predrag Matvejević taught at the University of the New Sorbonne in Paris as well as in the Sapienza in Rome. He is a vice president of the International PEN center.