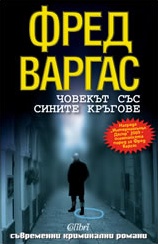 The Chalk Circle Man (French: L'Homme aux cercles bleus) is a novel by French crime-writer Fred Vargas. It is the first of her Detective Adamsberg series, published in 1996.

The novel describes the background of Adamsberg's move to Paris, the origins of his partnership with inspector Danglard, and a glimpse at his elusive relationship with Camille. Much emphasis is placed on the theme of different ways of thinking - contrasting the two policemen's distinct approaches to investigations, and indeed life. There are also a number of typical Vargas elements in the story: a pedestrian's view of the geography of Paris, independent, eccentric but effective older women, a misdirection of the apparently abnormal drawn over the deliberate actions of a killer.

Fred Vargas is the pseudonym of French historian, archaeologist and writer Frédérique Audoin-Rouzeau, born in 1957 in Paris. Fred is the diminutive of her given name, Frédérique, while Vargas derives from the Ava Gardner character in The Barefoot Contessa and is the pseudonym adopted by her twin sister, Joëlle Jo Vargas, a painter.

She mostly writes police thrillers (policiers). They take place in Paris and feature the adventures of Chief Inspector Adamsberg and his team. Her interest in the Middle Ages is manifest in many of her novels, especially through the person of Marc Vandoosler, a young specialist in the period. Seeking Whom He May Devour was shortlisted by the British Crime Writers' Association for the last Gold Dagger award for best crime novel of the year, and the following year The Three Evangelists won the inaugural Duncan Lawrie International Dagger. She also won the award for the second year-running with Wash This Blood Clean from My Hand.

There is no mystery about her success. France’s most acclaimed crime writer is a fan both of P.G. Wodehouse and Stendhal. Her detective stories are published in 40 countries. Her novels about the kindly, quixotic Commissaire Adamsberg are unique, presenting a France that resembles Simenon’s in its concreteness, but with a fantastical, even surreal, twist: werewolves, vampires and armies of ghosts on horseback. British Crime Writers’ Association has awarded her its annual International Dagger three times since the prize was inaugurated in 2006.

Fred Vargas took an important part in the defence of Cesare Battisti, a left-wing activist sought by Italian and French justice since 2004 for alleged assassinations committed in the 1970s, during the "years of lead".