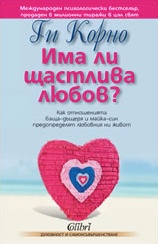 There is nothing more difficult than love and nothing more complex than living in a couple. Based on his psychoanalytic experience Guy Corneau lights up the hidden mechanisms that guide our behavoir with the partner.

The Canadian psychoanalytic Guy Corneau was born in 1951 in Québec. He is a follower of Jung and devides his time between the psycoanalytics and writing. An author of some world famous books as "Absent Fathers, Lost Sons", "Lessons in Love" which was published in enormous print in the USA, Germany, France, Italy, Sweden, Japan, etc. What made the book so successful was the simple way complex issues are explained which until then was not accessible for the wide range of unprofessionalist.

Besides the writing Corneau is lecturing people all over the world. He is also the founder of the "Heart" association where writers and doctors organize special courses dedicated to the personal development.

In 2007 Corneau was diagnosed with limphoma and withdrew from his public life. An year later he was already cured.

Being Genuine: Stop Being Nice, Start Being Real
Thomas d'Ansembourg

I Promise You Freedom
Laurent Gounelle

Parenting from the Inside Out
Daniel J, Siegel, Mary Hartzell