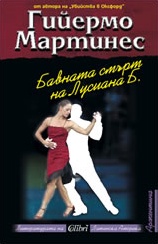 The Book of Murder

In this book Guillermo Martínez interweaves philosophical issues with a crime intrigue. The main character is a writer involved in a personal tragedy of a young woman. Her problem is unusual – all her relatives dying after a paradoxical sequence of coincidences. Whether the culprit is a famous novelist whom she has hurt or everything is her imagination?

With a concise and readable style, Guillermo Martínez balances between the different philosophical views of the crime and the punishment. But he does not take on the role of a judge but only that of the accurate observer of the hidden human nature's features.

Categories
Contemporary World FictionCrime and Thrillers
About the Author

Guillermo Martínez is a famous Argentine novelist and short story writer. He gained a PhD in mathematical logic at the University of Buenos Aires. After his degree in Argentina, he worked for two years in a postdoctoral position at the Mathematical Institute, Oxford.

His most successful novel has been The Oxford Murders, written in 2003. In the same year, he was awarded the Planeta Prize for this novel, which has been translated into a number of languages.