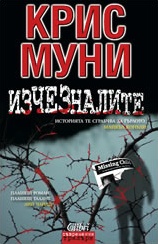 Darby McCormick was in high school when she first encountered the killer: someone murdered a woman in the woods where Darby and her two best friends were partying. His race to silence the witnesses was sure-footed and violent - but somehow Darby survived.

Twenty-five years later, Darby is a crime-scene investigator for the Boston Police Department, and a chilling case—a woman's late-night abduction—has her uncovering strange leads to missing women, past and present. As forensic clues lead her closer to a psychopath called the Traveler, Darby must finally resolve the nightmare of her past and come face-to-face with the killer who is determined to keep the missing—and the horrors they endured at his hands-from ever coming to light.

""The Missing" is the season's most unrelenting thriller. It will keep readers enthralled from its gripping opening chapters to its last shocking page." - George Pelecanos

Chris Mooney is the great hope of the American crime literature and the enormous circulation of his books can only justifies it. He has written four novels, including “Deviant Ways” (2000), “World Without End” (2001), “Remembering Sarah” (2004), which was nominated for a Barry Award and the Mystery Writers of America's prestigious Edgar Award for Best Novel. Mooney's latest novel is “The Missing” - the first in a series featuring Darby McCormick.

Chris Mooney lives near Boston with his family.