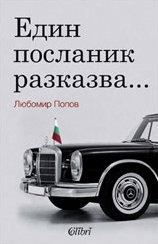 The memoirs of the highly respected and long-lived diplomat Lubomir Popov (1918-2005) provide a wide view over the bilateral relations of Bulgaria with different countries. Unfortunately, these memoirs couldn’t be published personally by the author, but every word in them is written by him.

Lubomir Popov started his carrier in 1948 in London as First secretary; in 1961 he became the first Bulgarian ambassador in India. He had appointments in the U.S.A., Egypt and Greece; and also had leading posts in the Ministry of foreign affairs. The memoirs reflect the work of the author in these countries; they also display his vision and evaluation for many historical events, in which he participated. His vivid language, sense of humor and the encounters with a number of great men (including the Indian Prime minister Jawaharlal Nehru, the American president John F. Kennedy, the prominent Greek politicians Konstantinos Karamanlis and Andreas Papandreou) make this book intriguing for a wide range of readers.

Categories
CelebritiesAutobiographiesHistory
About the Author

Lubomir Popov (1918-2005) was a Bulgarian diplomat working in London and in India as ambassador. Followed by USA, Egypt, Greece and the Ministry of Foreign Affairs.