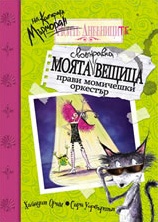 Dear Diary, This is my giant problem: being cat to a witch who doesn't want to be one. And as you will see from these diaries, it makes my life a right BAG OF HEDGEHOGS. So all I can say is, if Haggy Aggy tries to make friends with you, send her straight back to This Side with a spider in her ear.

Rumblewick is a HIGHLY QUALIFIED WITCH'S FAMILIAR to the MOST UNWILLING WITCH IN WITCHDOM. No wonder he uses every spare moment to scribble away in his diaries. It's the only way he keeps from going totally bats on a broomstick! I mean. Is HAGGY AGGY totally bats on a broomstick belfry or WHAT? She's only starting a GIRL BAND and I have to be in it even though it is as clear as new moonlight-I AM NOT A GIRL! HELP!