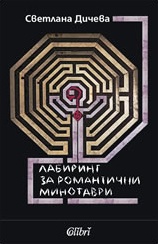 The new novel by Svetlana Dicheva “Maze for Romantic Minotaurs” (under the name of “Broken bed”) won one of the special prizes in the competition on the international project “Myths” of the Scottish publishing company Canongate. In this composite text the reader will meet Ariadne with her thread, Orpheus and Eurydice, and of course, Theseus and the Minotaur, Zeus, Dionysus and many other gods. Pleased, the reader will recognize the ingenious analogues between the distant past of myths and our recent past. He will also trace the contemporary story of Monika and The Radiant. And most of all will enjoy the magnificent variations on the theme of the Procrustean bed.

Svetlana Dicheva was born on January 14, 1960 in the city of Plovdiv. She graduated from the French Language School in the town of Sliven and majored in Radio Journalism in the Faculty of Journalism of the Sofia University “Kliment Ohridski”. For more than 20 years she has been working for the Horizont programme of the Bulgarian National Radio. She has been the anchorwoman of one of the most popular radio broadcasts on political problems. For four years now she has been specialising in the field of culture and book publishing and is the anchorwoman of the weekly culture talk show “Breakfast on the Lawn”, a great part of which is dedicated to promoting new books and interviewing Bulgarian writers, publishers and translators. In 2000 she published her first book “The Balkan Prophet” which comprises 20 short stories and the short novel “Guru and His Teacher”. The book was awarded the prize of the Foundation “Bulgarka” (Bulgarian Woman) for the best book by a woman writer, and it received favourable reviews from the critics. In 2005 her short story “Cherry Orchards” was included with three short stories by other Bulgarian authors in the Internet publication “East of No East” of the English Literary Internet Magazine Route Magazine, and in the 2005 December edition of the English website www.rthposition.com her short story “Tiberius In a Hat” was published. She speaks French as well as English.