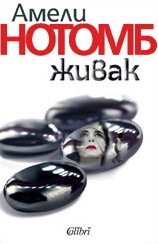 The novel is set, almost entirely, in 1923 and on a small, isolated island, owned by the mysterious old Capitaine, Omer Loncours. A nurse, Françoise Chavaigne is summoned, to take care of the island's other noteworthy inhabitant, the Captain's young ward, Hazel Englert. Hazel lost both her parents during the war, in a dreadful attack in which she was apparently horribly disfigured. Now approaching her twenty-third birthday, Hazel has fallen slightly ill and needs some medical attention.

Strict rules are set for Françoise when she comes to the island, the most notable being that she is not allowed to bring a mirror. By order of the Captain there are, indeed, no mirrors to be seen anywhere on the island, indeed nothing that reflects much of anything -- all so Hazel does not have to see her own reflection.

Françoise befriends Hazel -- who is, in any case, more in need of friendship than medical attention. Hazel's relationship with the Captain is decidedly unhealthy, and Françoise slowly learns more about the bizarre happenings on the island. She also uncovers an old obsession of the Captain's, another young woman that the Captain hid away, but who killed herself.

Nothomb builds up the story nicely, as Françoise gets drawn closer into this strange circle. The nurse tries to get Hazel to see herself in her real self, but she is thwarted by the Captain at every turn. She goes so far as to purchase thermometers, breaking them for the mercury in which Hazel might glimpse her true reflection.

It is an atmospheric little novel, and Nothomb's plot-turns are interesting enough. As usual, the book is heavy on dialogue, and most of it is quite clever and reveals the characters well.