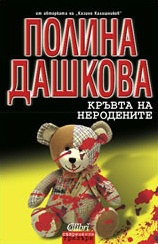 Blood of the Unborn

The journalist Lena Polyanska is expecting her first child. She has normal and non-problematic pregnancy, but during a routine medical examination she understands that her baby is dead and an emergency operation is required. Lena, sedated and unconscious, is taken to "specialized" hospital out of town where she manages to escape from. A well hidden secret is about to be revealed. To prevent the revelation Lena must die...

The German media called Polina Dashkova "the Russian queen of the thriller". All of her novels set up a true realistic scene because she describes the concrete contemporary Russian reality. Her main characters are only women that take the action in their own hands. They are average Russian women with common problems in a world dominated by men. However, Dashkova's writing is neither feminist, nor feminine. Her books are rather social, painting a true Russian world - magnificent and miserable.

The novels of Dashkova are translated in many languages, she is amongst the most read authors not only in her own country but also in Germany, France, Neatherland, Spain.