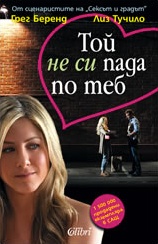 He's Just not That into You

He's Just Not That Into You -- based on a popular episode of Sex and the City -- educates otherwise smart women on how to tell when a guy just doesn't like them enough, so they can stop wasting time making excuses for a dead-end relationship. This book knows you're a beautiful, smart, funny woman who deserves better.

Greg Behrendt is a stand-up comedian. He was a consultant for the popular television show "Sex and the City". Behrendt co-wrote the New York Times best-sellers "He's Just Not That Into You" and "It's Called a Breakup Because It's Broken". He has appeared regularly on "The Tonight Show" and "Late Night with Conan O'Brien". His stand up special, "Greg Behrendt is Uncool", debuted on Comedy Central in January of 2006.