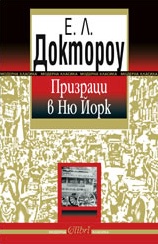 The setting of the novel is New York in the year 1871. Martin Pemberton, a freelance journalist, was at odds with his father Augustus, who died a few years ago. After his father’s death, Martin sees his father, briefly and accidentally in an omnibus as it goes past him. Martin begins to make inquiries but suddenly disappears. His employer and editor McIlvaine, starts looking for him. In a search for clues and connections, McIlvaine interrogates several characters including Martin’s fiancée, Emily Tisdale, Martin's stepmother, the painter Harry Wheelwright and the Reverend Charles Grimshaw. As soon as McIlvaine approaches police officer Edmund Donne for help, they begin to realize the full extent of Augustus Pemberton's game. Again and again they come back to the Croton Aqueduct. Soon McIlvaine and Donne find out that Augustus Pemberton has faked his death and together with other plutocrats of the city – are being kept alive by the dangerous and intelligent doctor and scientist Dr. Sartorius. Colluding with the historical character of William Tweed Sartorius has realized many of the keys to extended, perhaps eternal life. Its dark secret is that young children must be sacrificed for their blood and somatic cells. Dr. Sartorius considers himself innocent of their actual deaths, as each child taken "died from fright" and not from his nefarious medical attention. Martin Pemberton, who has been imprisoned by the Doctor, is freed by Donne and returns to his family. However, Martin has fallen ill and becomes deranged by his Stockholm syndrome fascination with Doctor Sartorius. In the meantime, Sartorius is brought to the insane asylum on Blackwell’s Island, where he continues his experiments, but upon himself. Without Sartorius' twisted scientific experiments, the half-dead plutocrats of the city, including Augustus Pemberton – die. The entire city of New York learns of the plot and becomes fascinated by the scientific racketeering. This is implied to be one of the many causes of Mr Tweed’s real-life imprisonment. However, the public never comes to know the full extent of Dr. Sartorius' experiments.

He is the author of The Book of Daniel, Ragtime, World’s Fair, Billy Bathgate, The Waterworks, and City of God. He has published two short-story collections, Lives of the Poets and Sweet Land Stories, and a collection of essays, Selected Essays: Jack London, Hemingway, and the Constitution.

His latest book, The March, won the 2006 PEN/Faulkner Award and the National Book Award.