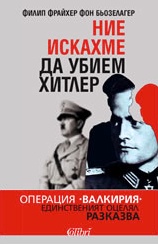 Valkyrie: An Insider's Account of the Plot to Kill Hitler

In this memoir, Philipp Freiherr von Boeselager says he didn't know about Nazi misdeeds as a young soldier-recruit in Germany during the 1930s. Yes, the Catholic Church, to which the aristocratic Boeselagers belonged, had denounced Nazism, but Philipp paid little attention. He did find out about Kristallnacht, the rampage against Jewish shops; but he and his fellow soldiers were sure that "the generals would act" to punish the hooligans. Otherwise, his cavalry regiment, he writes, "was hermetically sealed off from much of the outside world." But in 1942, Boeselager was witness to a horrific conversation in which a general calmly announced that he often ordered Jews and Gypsies to be shot without trial -- that, indeed, liquidating them was his mission. "This incident changed my view of the war," Boeselager recalls. He realized that the atrocities he'd been hearing about weren't isolated episodes but that "the state, as a whole, was riddled with vice and criminality". He and his brother Georg joined in a conspiracy, code-named Valkyrie, to save Germany by assassinating Hitler. The plot failed, but Boeselager survived the resulting purge of the army. Before his death in 2008, Boeselager sat for long conversations with Florence and Jérôme Fehrenbach, and together they produced "Valkyrie", which tells the real-life story behind the Tom Cruise movie of the same name. At the end, Boeselager lays out the three rules he tried to follow in his life: "to keep my political conscience awake, to respond to the call, and also to know how to say no".

Philipp Freiherr von Boeselager (6 September 1917 – 1 May 2008) was the last surviving member of the July-20 Plot, a conspiracy among high-ranking Wehrmacht officers to assassinate the German dictator Adolf Hitler in 1944.