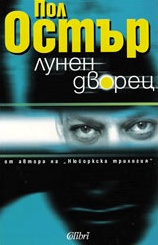 From Publishers Weekly: Marco Fogg, loner and dreamer, is forced from his Manhattan apartment and roams Central Park as a vagrant until he is rescued by gentle Kitty Wu. "The moon as a poetic and planetary influence over earthly affairs runs as a theme, wittily ransacked, throughout this elegant fiction".