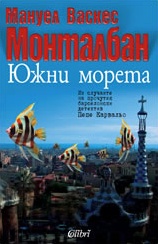 The body of Stuart Pedrell, a powerful businessman, is found in a Barcelona suburb. He had disappeared on his way to Polynesia in search of the visionary spirit of Paul Gaugin. The trail for his killer unearths a world of disillusioned lefties, graphic sex and nouvelle cuisine.

Manuel Vázquez Montalbán (Barcelona, July 27, 1939 - Bangkok, October 18, 2003) was a prolific Spanish writer: journalist, novelist, poet, essayist, anthologue, prologist, humourist, critic, as well as a gastronome and an F.C.Barcelona fan. He studied Philosophy at Universidad Autonómica de Barcelona and was also a member of the Unified Socialist Party of Catalonia. For many years, he contributed columns and articles to the Madrid-based daily newspaper El País. He died in Bangkok, Thailand, while returning to his home country from a speaking tour of Australia. His last book, La aznaridad, was published posthumously.