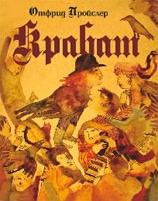 The book was first published in 1971 under the title Krabat. The story deals primarily with black magic and the lure of evil. Other themes include friendship, love, and death. It won the Deutscher Jugendliteraturpreis in 1972.

Set in the early 18th century, the story follows the life of Krabat, a 14-year-old Wendish (i.e. Sorbian) beggar boy living in the eastern part of Saxony. For three consecutive nights, he is called through a dream to a watermill near the village Schwarzkollm. Upon heeding the call and arriving at the mill, he begins his apprenticeship as a miller's man. He soon joins the secret brotherhood, composed of journeymen and apprentices, and discovers that the skill he is meant to learn through this apprenticeship is Black Magic. The first magic powers Krabat acquires are rather harmless, such as the ability to turn himself into a raven. Other peculiarities of this watermill include the lack of any outside visitors, including farmers who would have brought grain.

Categories
Children's and Young Adults9+ years
About the Author

He was born in Liberec (German: Reichenberg), Czechoslovakia. His forefathers had lived in this area since the 15th century, working in the glass industry. His parents were teachers. After he graduated school in 1942, in the midst of World War II, he was drafted into the Wehrmacht Heer. Although he survived the military action on the Eastern Front, he was taken prisoner as a 21 year old lieutenant in 1944. He spent the next five years in various POW camps in the Tatar Republic. After his release in June 1949, he was lucky to find in the Bavarian town of Rosenheim his displaced relatives and his fiancée, Annelies Kind. They celebrated their wedding the same year.

Between 1953 and 1970 he was initially a primary school teacher, then a school principal in Rosenheim. There his talents as a storyteller and illustrator were put to good use, and often the stories he told the children would later be written down and published. He won the Deutscher Jugendliteraturpreis in 1972 for Krabat.