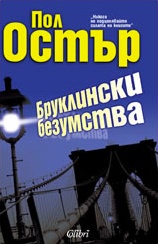 The 60-year-old Nathan Glass returns to Brooklyn after his wife has left him. He is recovering from lung cancer and looking for a quiet place to die. In Brooklyn he meets his nephew, Tom, whom he has not seen in several years. Tom has seemingly given up on life and has resigned himself to a string of meaningless jobs as he waits for his life to change. They develop a close friendship, entertaining each other in their misery, as they both try to avoid taking part in life.

When Lucy, a little girl who refuses to speak, comes into their lives there is suddenly a bridge between their past and their future that offers both Tom and Nathan some form of redemption.

The Brooklyn Follies contains the classic elements of a Paul Auster novel. The main character is a lonely man, who has suffered an unfortunate reversal. The narrative is based on sudden and randomly happening events and coincidences.

The novel was published in Danish in May 2005, under the name Brooklyn Dårskab.