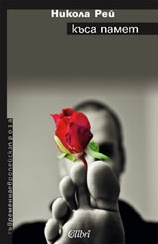 The young Gabriel is mostly interested in alchohol, drugs and sex that has been lacking their pleasing effect for a long time now. He works in the advertising area and marries a girl having no idea why. There was time when Gabriel was able to love, when he himself was kind, charming and energetic but none of it has left a trace in his memory. However, the short memory does not prevent him from realizing his own disgrace and loathing himself because of that.

This lifestyle is much familiar to young people nowadays and that is why the novel has a great success. It is hurtfully honest and it honestly hurts to recognize yourself in the character of Gabriel.

Nicolas Rey is a French writer born in Evreux, Eure, on the 8th of May 1973. In 2000, Rey received the “Prix de Flore”, a French literary prize awarded to youthful authors, for his novel “Mémoire Courte”. Following his start on the French television show “Cuisine et Dépendance”, Rey became a daily reviewer on the French television network Canal Plus show “En Aparté”. Next, on the same channel, he co-hosted a show reviewing recent-happenings called “Un Café et l’Addition”. His literature column, “Entre les Lignes”, appears in the French magazine VSD.