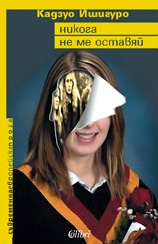 Never Let Me Go (2005) is a novel by British author Kazuo Ishiguro. It was shortlisted for the 2005 Booker Prize (an award Ishiguro had previously won in 1989 for The Remains of the Day), for the 2006 Arthur C. Clarke Award and for the 2005 National Book Critics Circle Award. Time magazine named it the best fiction novel of 2005 and included the novel in its TIME 100 Best English-language Novels from 1923 to 2005. It also received an ALA Alex Award in 2006.

Kazuo Ishiguro is a British novelist. Born in Nagasaki, Japan, his family moved to England in 1960. Ishiguro obtained his Bachelor's degree from University of Kent in 1978 and his Master's from the University of East Anglia's creative writing course in 1980. He became a British citizen in 1982. He now lives in London with his wife Lorna MacDougall and daughter Naomi.

He was featured in the first two Granta Best of Young British Novelists: 1983 and 1993. He won the Whitbread Prize in 1986 for his second novel, An Artist of the Floating World. He won the Booker Prize in 1989 for his third novel, The Remains of the Day. An Artist of the Floating World, When We Were Orphans and his most recent book, Never Let Me Go, were both short-listed for the Booker Prize, with the latter being named the runner-up. In 1998, he was awarded the Ordre des Arts et des Lettres by the French Ministry of Culture. On Time magazine's 2005 list of the 100 greatest English language books since the magazine formed in 1923, Never Let Me Go was the most recently published book on the list.