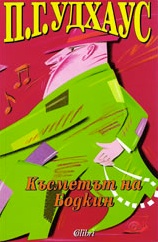 The Luck of the Bodkins

To the majority of the passengers aboard the R.M.S. "Atlantic" the voyage to America was just a pleasant interlude in life's hectic rush. But not so to Monty Bodkin. Monty's wooing of Gertrude Butterwick was not progressing as it should, and the cause of all ; he trouble was Miss Lotus Blossom, the brightest star in Hollywood's firmament. The easy cameraderie of Miss Blossom, coupled with the idea that Monty was the only person who could send the errant Ambrose back to her welcoming arms, was causing Mr. Bodkin moments of acute distress. But Lotus and Monty were not the only ones to wear the furrowed brow. Reggie Tennyson was another, and so was Ikey Llewellyn. Reggie's trouble was pecuniary; but Ikey's was more serious, for he had something on his mind—a dangerous condition for one of his mental capacity. Finally there was Albert Peasemarch, prince of stewards and singer of ballads, whose sanity was threatened by the complete goofiness of his charges. This is a book of laughter, packed with the most glorious situations and related in the inconsequential manner which is the hall-mark of authentic Wodehouse. In short, another Wodehouse triumph.

The Luck of the Bodkins
P. G. Wodehouse