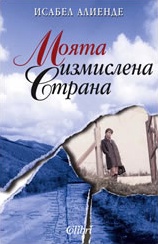 Isabel Allende's first memory of Chile is of a house she never knew. The “large old house” on the Calle Cueto, where her mother was born and which her grandfather evoked so frequently that Isabel felt as if she had lived there, became the protagonist of her first novel, The House of the Spirits. It appears again at the beginning of Allende's playful, seductively compelling memoir My Invented Country, and leads us into this gifted writer's world.

Here are the almost mythic figures of a Chilean family -- grandparents and great-grandparents, aunts, uncles, and friends - with whom readers of Allende's fiction will feel immediately at home. And here, too, is an unforgettable portrait of a charming, idiosyncratic Chilean people with a violent history and an indomitable spirit. Although she claims to have been an outsider in her native land -- “I never fit in anywhere, not into my family, my social class, or the religion fate bestowed on me” - Isabel Allende carries with her even today the mark of the politics, myth, and magic of her homeland. In My Invented County, she explores the role of memory and nostalgia in shaping her life, her books, and that most intimate connection to her place of origin.

Two life-altering events inflect the peripatetic narration of this book: The military coup and violent death of her uncle, Salvador Allende Gossens, on September 11, 1973, sent her into exile and transformed her into a writer. The terrorist attack of September 11, 2001, on her newly adopted homeland, the United States, brought forth from Allende an overdue acknowledgment that she had indeed left home. My Invented Country, whose structure mimics the workings of memory itself, ranges back and forth across that distance accrued between the author's past and present lives. It speaks compellingly to immigrants, and to all of us, who try to retain a coherent inner life in a world full of contradictions.