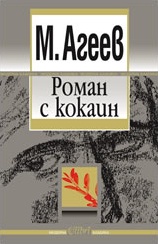 An emigrant’s novel from 1934, the book’s author is identified more than sixty years later. Until that moment it was believed that the book was written by Nabokov and M. Ageyev was one of his pseudonyms. It was recently proven that the real author’s identity belongs to the Russian novelist Mark Levi.

This is a cold-eyed and unsettling novel, told with sardonic humor and voluptuous imagery. As we follow Vadim’s downward spiral into addiction, we’re confronted with the classic opposition between grim social reality and the insatiable human desire for bodily pleasure. Surprisingly, the novel’s concerns are not overtly political. The Revolution is nothing but a distant thunder to Vadim’s glazed perceptions. He is disdainful both of bourgeois privilege and smug Communist ideology. But the harshest judgments are reserved for his own self-loathing and the contradiction he perceives within his psyche: "sensuality and spirituality were for some reason completely separate in me."

M. Ageyev is believed to be the nom-de-plume of a relatively obscure Russian author of the early 20th century, Marc Levi (alt. spelling Mark Levi). His best-known work, Novel With Cocaine (also translated as the Cocain Romance), was published in 1934 in the Parisian émigré publication, Numbers. Nikita Struve has alleged it to be the work of another Russian author employing a pen name, Vladimir Nabokov; this idea was debunked by Nabokov's son Dmitry in his preface to "The Enchanter". Levi's life is shrouded in mystery and conjecture. He seems to have returned to the U.S.S.R. in 1942 and spent the rest of his life in Yerevan, where he probably died on August 5, 1973.