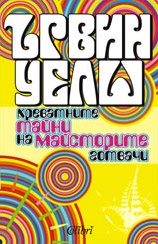 The Bedroom Secrets of the Master Chefs

Welsh, who will probably never live down Trainspotting (1993), gets considerable comic mileage from dual Edinburgh protagonists and their disparate perspectives. Danny Skinner is the bad boy of the local restaurant inspection office, partying hearty, keeping irregular hours and doing just enough to keep a tenuous hold on his job and on longtime girlfriend Kay, a dancer. The arrival at the office of eager-to-please Brian Kibby, a virginal nerd fresh from university, completely throws off Danny's game and draws his unmitigated ire ("Another fucking clone, another Foy arse-licking sycophant"). As Brian's father lays dying, Danny, who never knew his father, sets out to discover his father's identity; meanwhile, smarmy celebrity chef Alan De Fretais, with his filthy kitchen, brings things to a buddy-movie flashpoint. With plenty of plot movement "Danny journeys to America; Brian falls prey to a mysterious illness that requires Danny to really function at work" and rich characters, the novel keeps the reader entertained with a full-bodied (those kitchens are hot and cramped) view of life's ironies. It's eminently filmable, but not in the manner of its illustrious predecessor; Welsh's expansive storytelling and archly imaginative humor now suggest a more aggro John Irving.