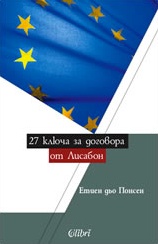 The Treaty of Lisbon (initially known as the Reform Treaty) is an international agreement that amends the treaties governing the European Union (EU). The Lisbon Treaty was signed by the EU member states on 13 December 2007, and entered into force on 1 December 2009.

Prominent changes included the move from required unanimity to double majority voting in several policy areas in the Council of Ministers, a more powerful European Parliament as its role of forming a bicameral legislature alongside the Council of Ministers becomes the ordinary procedure, a consolidated legal personality for the EU and the creation of a long-term President of the European Council and a High Representative of the Union for Foreign Affairs and Security Policy. The Treaty also made the Union's bill of rights, the Charter of Fundamental Rights, legally binding.

What were the leading reasons to this treaty? What are its profits for the European institutions? What are the prognoses for its future implement? The book helps the better understanding of the threaty. It includes 27 "keys" every of which is dedicated to a certain problem.

The War Is Coming Back
Henry Pozzi