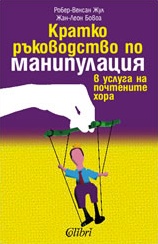 Manipulation is often considered to be undesirable and morally reprehensible. The object is indeed to make others do things that they would have ordinarily refused to do if asked directly. Even so, this manner of influence is commonly used in the business world – either wittingly or unwittingly, to noble or spurious ends. A better understanding of the underlying mechanisms will help you utilize this phenomenon knowingly, or avoid being manipulated, as the case may be.

Categories
PsychologyPopular Psychology
About the Author

Jean-Léon Beauvois is a professor of Social Psychology. His best known work is “Petit traité de manipulation à l'usage des honnêtes gens” (“Concise Handbook Of Manipulation In Honest People's Favour”, 2002), written with Robert-Vincent Joule. The book is a best-seller that has sold 200 000 copies in France and has been translated in several languages.

Parenting from the Inside Out
Daniel J, Siegel, Mary Hartzell

The Seven Common Sins of Parenting an Only Child: A Guide for...
Carolyn White

What We Don’t Know About Love
Milena Rodriguez

How to Parent
Dr Fitzhugh Dodson