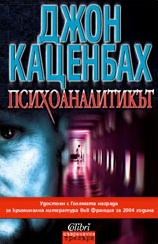 When a mysterious letter bearing these threatening words is delivered to Dr. Frederick Starks, his predictable life is thrown into chaos. Suddenly, the psychoanalyst is plunged into a horrific game designed by a man who calls himself Rumplestiltskin.

John Katzenbach’s previous novels include two Edgar nominees, In the Heat of the Summer, adapted for the screen as The Mean Season, and The Shadow Man, as well as the New York Times bestseller The Traveler, Day of Reckoning, Just Cause, which was made into a movie by Warner Brothers, and State of Mind.

He has been a criminal court reporter for The Miami Herald and Miami News and a feature write for the Herald’s Tropic magazine. His work has appeared in many other newspapers, including The New York Times, The Washington Post, and The Philadelphia Inquirer.