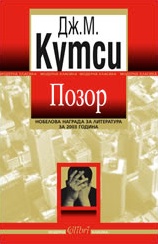 Emerging from the dissident calibrations of literary voices joined together in the culture of protest against the apartheid regime, the distinctive writing of the novelist, critic and academic J M Coetzee has become identified as one of the most finely tuned among contemporary Southern African writers. From the local recognition accorded his earliest novel Dusklands to the international acclaim with which his rewriting of Defoe's Robinson Crusoe story, Foe was received, Coetzee has dedicated himself to transforming South African writing from a blunt weapon of struggle to a delicate and incisive instrument of reflective liberation.

Disgrace takes as its complex central character 52-year-old English professor David Lurie whose preoccupation with Romantic poetry--and romancing his students--threatens to turn him into a "a moral dinosaur". Called to account by the University for a passionate but brief affair with a student who is ambivalent about his embraces, David refuses to apologise, drawing on poetry before what he regards as political correctness in his claim that his "case rests on the rights of desire." Seeking refuge with his quietly progressive daughter Lucie on her isolated small holding, David finds that the violent dilemmas of the new South Africa are inescapable when the tentative emotional truce between errant father and daughter is ripped apart by a traumatic event that forces Lucie to an appalling disgrace. Pitching the moral code of political correctness against the values of Romantic poetry in its evocation of personal relationships, this novel is skillful--almost cunning--in its exploration of David's refusal to be accountable and his daughter's determination to make her entire life a process of accountability. Their personal dilemmas cast increasingly foreshortened shadows against the rising concerns of the emancipated community, and become a subtle metaphor for the historical unaccountability of one culture to another.

The ecstatic critical reception with which Disgrace has been received has insisted that its excellence lies in its ability to encompass the universality of the human condition. Nothing could be farther from the truth, or do the novel--and its author--a greater disservice. The real brilliance of this stylish book lies in its ability to capture and render accountable--without preaching--the specific universality of the condition of whiteness and white consciousness. Disgrace is foremost a confrontation with history that few writers would have the resources to sustain. Coetzee's vision is unforgiving--but not bleak. Against the self-piteous complaints of all declining cultures and communities who bemoan the loss of privileges that were never theirs to take, Coetzee's vision of an unredeemed white consciousness holds out--to those who reach towards an understanding of their position in history by starting again, with nothing--the possibility of "a moderate bliss."

John Maxwell "J.M." Coetzee (IPA: /kʊtˈsiː ə/ or Afrikaans IPA: [kutˈsiˑe]) (born 9 February 1940) is an author and academic from South Africa (now an Australian citizen living in South Australia). A novelist and literary critic as well as a translator, Coetzee won the 2003 Nobel Prize in Literature.