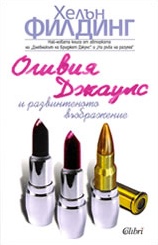 Olivia Joules and the Overactive Imagination

Considering the number of writers who've tried, and generally failed, to do plummy Bridget Jones one better, it only makes sense that Fielding should take a vacation from the genre she spawned and seek greener pastures. Her new inspiration? Think Ian Fleming. Fielding's ridiculous, delicious, wildly improbable plot goes something like this: freelance journalist Olivia Joules ("as in the unit of kinetic energy"), formerly Rachel Pixley (her whole family got run over when she was 14), gets bumped from the Sunday Times's international coverage down to the style pages thanks to the titular imagination (e.g., a story about a "cloud of giant, fanged locusts pancaking down on Ethiopia"). In between ducking twittering PR reps and airheaded blondes at a Miami face cream launch party, she uncovers what looks like an al-Qaeda plot, headed by a dreamy Osama bin Laden look-alike, who is either a terrorist, an international playboy, a serial killer or all of the above. Languid, mysterious Pierre Feramo returns Olivia's interest, and thus begins an around-the-world adventure that has plucky Olivia eventually recruited by MI6. In addition to the fun spy gear (e.g., Chloé shades fitted with a nerve-agent dagger) there are kidnappings, bomb plots and scuba-diving disasters. Olivia is slim, confident and accomplished; ostensibly, she's "painstakingly erased all womanly urges to question her shape, looks, role in life", etc. But she still has her bumbling Jonesian moments, and though she may not need a man, she'll get one in the end. What's wrong with the book: two-dimensional characters, dangling plot threads, the questionable taste of al-Qaeda bombings in an escapist, comic spy novel. What's right: girl-power punch, page-turning brio and a new heroine to root for.

Categories
Chick Lit
About the Author