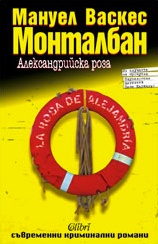 This novel establishes unpredictable relations between things; it is a strange story about desire, despair and redemption. The plot is set in Spain and Trinidad and through its characters talks about crime, cinema, prostitution, working class and other unexpected topics, which turn the book into something much more than a detective story.

Categories
Crime and Thrillers"Contemporary Crime Novels" Series
About the Author

Manuel Vázquez Montalbán (Barcelona, July 27, 1939 - Bangkok, October 18, 2003) was a prolific Spanish writer: journalist, novelist, poet, essayist, anthologue, prologist, humourist, critic, as well as a gastronome and an F.C.Barcelona fan. He studied Philosophy at Universidad Autonómica de Barcelona and was also a member of the Unified Socialist Party of Catalonia. For many years, he contributed columns and articles to the Madrid-based daily newspaper El País. He died in Bangkok, Thailand, while returning to his home country from a speaking tour of Australia. His last book, La aznaridad, was published posthumously.