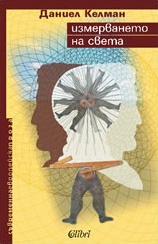 Measuring the World is a novel by the young Austrian writer Daniel Kehlmann who has been hailed as one of the most promising new generation of writers. This novel is the first of his to be translated into English (by Carol Brown Janeway) and has become an international sensation.

The novel examines the themes of Genius and Freedom through the extraordinary lives of two great Enlightenment-era scientists: Gauss and Humboldt. Gauss is a consummate genius who is considered to be the greatest mathematician since Newton. Humboldt is one of the greatest naturalist and explorer the world has ever seen.

Daniel Kehlmann was born in 1975 in Munich, now lives in Vienna. His third novel “Measuring the World” (German: “Die Vermessung der Welt”), published in 2005, is the biggest selling novel in the German language since Patrick Süskind's Perfume was released in 1985. For this novel Kehlman has been awarded with the “Heimito von Doderer” prize.