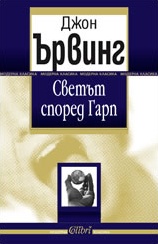 The World according to Garp

The World According to Garp is John Irving's fourth novel. Published in 1978, the book was a bestseller for several years. A movie adaptation starring Robin Williams was released in 1982.

The story deals with the life of T. S. Garp. His mother, Jenny Fields, is a strong-willed nurse who wants a child but not a husband. She is asexual, a trait condemned by her family and disapproved of by society. She encounters a dying ball turret gunner known only as Technical Sergeant Garp who was reduced to a perpetually priapic mental vegetable by pieces of shrapnel that pierced his head. Jenny has intercourse with the bedridden, uncomprehending, dying Technical Sergeant Garp to impregnate herself, and names the resultant son after him ("T. S." standing only for "Technical Sergeant"). Jenny raises young Garp alone, taking a position at a boys' school. Garp grows up, becoming interested in sex, wrestling, and writing fiction--three topics in which his mother has little interest. He launches his writing career, courts and marries the wrestling coach's daughter, and fathers three children. Meanwhile, his mother suddenly becomes a feminist icon after publishing a best-selling autobiography called A Sexual Suspect (referring to the general assessment of her as a woman who does not care to bind herself to a man, and who chooses to raise a child on her own). Garp becomes a devoted parent, wrestling with anxiety for the safety of his children and a desire to keep them safe from the dangers of the world. He and his family inevitably experience dark and violent events through which the characters change and grow. Garp learns (often painfully) from the women in his life, struggling to become more tolerant in the face of intolerance. The story is decidedly rich with (in the words of the fictional Garp's biographer) "lunacy and sorrow," and the sometimes ridiculous chains of events the characters experience still resonate with painful truth. The novel contains several framed narratives: Garp's first novella, "The Pension Grillparzer," a short story, and a portion of one of his novels, "The World According to Bensenhaver." As well, the book contains some motifs that appear in almost all John Irving novels: bears, wrestling, Vienna, New England, people who are uninterested in having sex, and a complex Dickensian plot that spans the protagonist's whole life. Adultery (another common Irving motif) also plays a large part, culminating in one of the novel's most harrowing and memorable scenes. There is also a tincture of another familiar Irving trope, castration anxiety, most obvious in the lamentable fate of Michael Milton.

Irving achieved critical and popular acclaim after the international success of The World According to Garp in 1978. Some of Irving's novels, such as The Cider House Rules and A Prayer for Owen Meany, have been bestsellers and many have been made into movies. Several of Irving's books (Garp, Meany, Widow) and short stories have been set in and around Phillips Exeter Academy in Exeter, New Hampshire where Irving grew up as the son ("fac brat") of an Exeter faculty member, Colin F.N. Irving (1941), and nephew of another, H. Hamilton "Hammy" Bissell (1929). (Both Irving and Bissell, and other members of the Exeter community, appear somewhat disguised in many of his novels.)

Irving was in the Exeter wrestling program under Coach Ted Seabrooke both as a wrestler and as an assistant coach, and wrestling features prominently in his books, stories and life.

He also won the 2000 Best Adapted Screenplay Academy Award for his script The Cider House Rules.