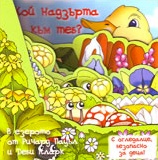 Who's Peeking at You? from the Pond

A duck peeks through the foliage at a frog, a snail, and other small creatures. Baby's "Who's Peeking at You?" board book is as charming as it is cleverly designed. Starting with the front cover, layered, cut-away pages combine to suggest a 3D scene. As pages are turned, Mom or Dad can help baby find and identify a friendly animal that is hidden among the details of each color illustration. The last page features a non-breakable acrylic mirror. This time, Baby peeks and sees their own face!

Categories
Children's and Young Adults0-3 years
About the Author

In the 1940s, Powell began writing fiction and in 1958 was able to devote himself to full time writing. His first published books were Inner Sanctum Mysteries, published from 1943 to 1955. His major publishing debut, The Philadelphian in 1957, spent more than six months on the bestseller list.