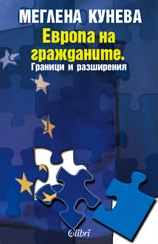 The book tells about Bulgaria’s negotiations with the EU and the Treaty, which our country signed: about the myths around these key events and the realities beyond the myths. In an illuminating manner, referring to numerous facts, she points out the pros and shows the mechanisms, whereby the EU has been acting as the key incentive for reforms in Bulgaria. Meglena Kuneva’s book, however, is also a more general story about Europe: she tells about Europe of the dreams, Europe as a symbol of freedom and democracy and Europe as a future, promising more civil involvement and participation, more prospects for every member of the community, no matter whether an individual state, or an individual citizen is concerned. And, finally, the book is also a kind of a textbook of European studies, because its fundamental thesis is addressed to what it is to be a European spiritualy and mentally; what the cultural images of Europe are and what European citizenship is in the globalised world of today.

Categories
SocietyHistory
About the Author

Meglena Kuneva is a jurist by education. She lectured ecological law at the St Kliment Ohridski University of Sofia, at the New Bulgarian University and the Free University of Burgas; she had been editor and host at the Bulgarian National Radio. She is the author of a script of a documentary against the death penalty and of the monograph Commentary and Practice of the Law of Concessions. She is a member of the Managing Board of A Soul for Europe European initiative for cultural policies. As the head negotiator and minister on European matters, Meglena Kuneva signed the Treaty of Accession of Bulgaria to the European Union. From the beginning of 2007 she was elected member of the European Commission in charge of Consumer Protection.