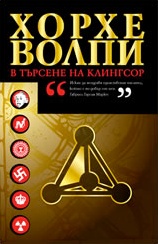 In Search of Klingsor

Volpi’s most famous book, 'En busca de Klingsor' ("In Search of Klingsor", 1999) is a novel that fuses a story of Nazi generals in World War II and the history of physics. In this novel an American physicist and a German mathematician are on a mission to discover information about Klingsor, the codename for the person in charge of the Nazi party's scientific research. On their odyssey the two are lead to some of the greatest scientists of all time. For his work on this novel, Volpi won the Spanish literary prize, Premio Biblioteca Breve, in addition to the French Deux-Océans-Grinzane-Cavour-Prize.

Categories
Contemporary FictionContemporary World FictionCrime and Thrillers
About the Author

Jorge Volpi [born July 10, 1968] in Mexico City. Volpi studied law and literature at the Universidad Nacional Autónoma de México and received a PhD in Spanish philology at the Universidad de Salamanca in Spain. After his career as a student, Jorge Volpi became a lawyer, and he was a secretary for Diego Valadés, the Mexican general state lawyer for two years. After that Volpi found the "Crack Movement". The authors that are a part of this Mexican literary group (for instance Eloy Urroz, Ignacio Padilla, and Pedro Angel Palou) write beyond magical realism and mimic the ideals of the 1968 Latin American literary "Boom". These authors were not interested in defining "Mexican Literature", instead they wanted Mexican authors to find their own voice and implement that into their writings. Volpi, himself, was influenced by other authors such as Juan Rulfo, Carlos Fuentes and Octavio Paz.