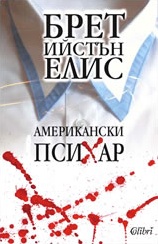 In American Psycho, Bret Easton Ellis imaginatively explores the incomprehensible depths of madness and captures the insanity of violence in our time or any other. Patrick Bateman moves among the young and trendy in 1980s Manhattan. Young, handsome, and well educated, Bateman earns his fortune on Wall Street by day while spending his nights in ways we cannot begin to fathom. Expressing his true self through torture and murder, Bateman prefigures an apocalyptic horror that no society could bear to confront.

Categories
Contemporary FictionContemporary World FictionCrime and Thrillers
About the Author

Bret Easton Ellis (born March 7, 1964 in Los Angeles, California) is an American author. He was regarded as one of the so-called literary Brat Pack, which also included Tama Janowitz and Jay McInerney. He has called himself a moralist, although he has often been pegged as a nihilist. His characters are young, generally vacuous people, who are aware of their depravity but choose to enjoy it. The novels are also linked by common, recurring characters, and dystopic locales (such as Los Angeles and New York).

While unapologetically playing with the petrifying distortion of the American dream at the end of last century, Bret Easton Ellis has become a living icon for the generation of the 90s worldwide. His twisted ways of mixing comedy and horror, ethics and degradation, luxury and misery, dreams and nightmares, have turned his literary works into some of the touchstones of contemporary pop culture. As self-assured and cocky as a L.A.-born can get, Ellis fiercely vivisects the life-style, values and mores of the USA through the astonishing fate of his “American Psycho’ protagonist Patrick Bateman – a literary scapegoat for all the avaricious, soulless investment bankers on Wall Street. His other works “Glamorama” (1998) and “Lunar Park” (2005) continue to dig into the abyss of postmodern society and its mindless desire factories. Bret Easton Ellis is definitely one of the most prominent authors of the Generation X, a prophet and a joker, who tells the unedited version of our times with an all-knowing wink and then invites you to enter the void.