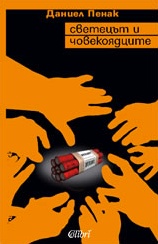 The Scapegoat is a light-hearted entertainment. Its plot has enough twists and turns to keep one hooked, and though it's somewhat surreal and not particularly plausible it doesn't take itself seriously enough for that to be a problem. Much of the entertainment comes from the menagerie of characters, starting with Ben himself and the extraordinary family he heads, consisting of five half-siblings (the result of their mother's wanderlust) and a stinking, epileptic dog. Then there is the statuesque investigative journalist with whom Ben becomes involved, a Nazi-sympathising bookseller, police inspector Coudrier, and assorted other denizens of the Beleville Arab quarter of Paris in which The Scapegoat is set.

Daniel Pennac (real name Daniel Pennacchioni, born 1944 in Casablanca, French Morocco) is a French writer. He received the Prix Renaudot in 2007 for his essay “Chagrin d'école”.

After studying in Nice he became a teacher. He began to write for children and then wrote his book series “La Saga Malaussène”, that tells the story of Benjamin Malaussène, a scapegoat, and his family in Belleville, Paris. In a 1997 piece for “Le Monde”, Pennac stated that Malaussène was the son of Jerome Charyn's New York detective Isaac Sidel.

His writing style can be humorous and imaginative like in “La Saga Malaussène”, but he can also write “Comme un roman”, a pedagogic essay. His “Comic Débauche”, written jointly with Jacques Tardi, treats the topic of unemployment, revealing his social preoccupations.

In 1990 Pennac won the "Prix du Livre Inter" for "La petite marchande de prose". His 1984 novel "L'œil du loup" was translated into English as "Eye of the Wolf" by Sarah Adams, winning her the Marsh Award for Children's Literature in Translation in 2005. In 2007 he won the prix Renaudot for "Chagrin d'école". He won the "Grand Prix Metropolis bleu" in 2008 for his complete work.