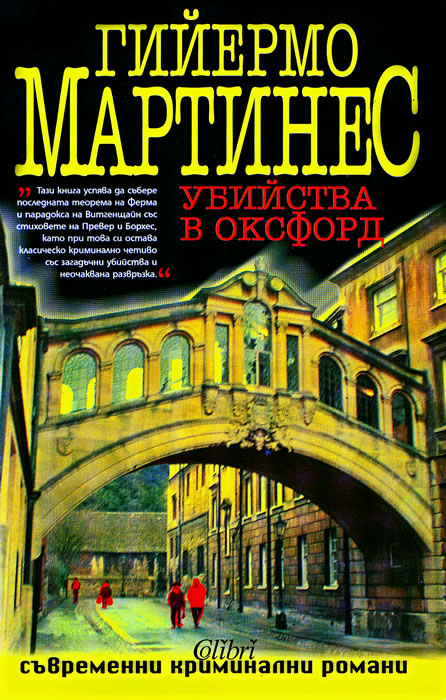 Math and murder mingle in this intriguingly cerebral mystery. When an Argentine math student at Oxford discovers the smothered body of his landlady, conventional wisdom points to a family member with the most prosaic of motives. But then renowned logician Arthur Seldom, author of a book on the mathematics of serial killers, tells of a strange note left in his mailbox indicating the murder is the first of a series linked by a mysterious pattern. More bodies pile up, apparently of natural causes, but each paired with a message bearing a new arcane symbol. Arthur and his student ponder whether the deaths are innocent or the subtle, "imperceptible" homicides of a madman seeking to match wits with the great logician, and they rack their brains to decipher a pattern behind the signs before another corpse turns up. Martinez, a novelist and math Ph.D., writes with a restrained, elegant style sprinkled with brief disquisitions on Gödel's theorem, Heisenberg's uncertainty principle and Wittgenstein's paradox, which demonstrates "the impossibility of establishing an unambiguous rule." None of that helps very much in solving the crimes, but it makes an intriguing context for the author's exploration of a fundamental mystery theme;how we impose meaningful patterns on the confusing evidence of reality and are in turn misled and blinded by those patterns. The result is a stylish, intellectually meaty whodunit.

Guillermo Martínez is a famous Argentine novelist and short story writer. He gained a PhD in mathematical logic at the University of Buenos Aires. After his degree in Argentina, he worked for two years in a postdoctoral position at the Mathematical Institute, Oxford.

His most successful novel has been The Oxford Murders, written in 2003. In the same year, he was awarded the Planeta Prize for this novel, which has been translated into a number of languages.