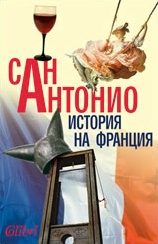 Rough, ironic, uncompromising laughter. This seems to be the first reaction of every average reader, after reading a few lines of “History of France”. But this book is more complicated and poly-semantic, addressed to those, who can laugh and think.

San Antonio is a pen-name of the French author Frédéric Dard (1921-2000) who is noted for his tremendous productivity – he wrote more than 300 novels throughout his career and sold more than 270 million books. Frédéric Dard was one of the most famous French crime novel writers in the second half of the 20th century.

Before his devotion to writing, Frédéric Dard worked as a journalist in various magazines and newspapers. In 1949 was published his first book – ”Settle His Hash” - under the pen-name San Antonio (San-Antonio is both – the main character and the author's pseudonym.) By then till his death, under the pseudonym San Antonio, Dard wrote 145 novels. The total print run to 105 million copies!

Under the pen-name San Antonio were issued also thirteen volumes which were not part of “San Antonio” detective series. Some of them are: “History of France, seen by San Antonio” (more than 1 800 000 copies of it have been sold!), “Are Any Frenchmen In The Hall?”, “The Fools”, “Beru-Beru” and other.

Under his real name, Frédéric Dard published about sixty novels: “The Crash”, “The Sad Killer”, “A Nightmare At Dawn” and other. He has wrote and many plays: “The Snow Was Dirty”, “San Antonio”, “The Lady From Chicago”, “The Mists Of Manchester” and other.

Most of Dard's novel are filmed: “Daddy, Buy Me A Prostitute”, “The Elevator”, “A Red Roe” and other.

Written in a classical crime novel style at the beginning in the 50's, San Antonio's stories became more satirical by the beginning of the 60's and left the strict format of the crime novel literature. The style is full of French slang and new words coined by the author himself, which makes it quite difficult for non-native speakers.

What I'd Rather not Think About
Jente Posthuma