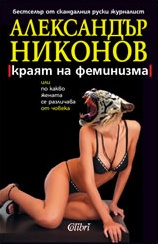 The End of Feminism

Bright and unusual book about the tragic doom of the white heterosexual man in the world he created and civilized by himself. The publication of the book instigates a violent dispute and bitter attacks. Unbelievable practices are still widely spread in the U.S.A. and in western Europe. The educational crisis, the absurdity of the political correctness and judicature, the general decline - this is only the introduction. That background only helps the reader to realize the malformation of the developed “feminism” with its human face.

Alexander Nikonov is a Russian nonfiction writer and journalist, born in 1964 in Moscow. He has worked as a journalist in various top Russian magazines and has written and published over a dozen books.