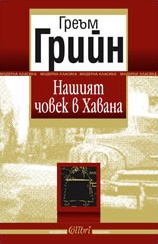 Our Man in Havana

Our Man in Havana (1958) is a novel by British author Graham Greene. Certain aspects of the plot, in particular the importance of rocket-launchers, appear to predict the Cuban Missile Crisis, which took place in 1962.

It was adapted into a film of the same name in 1959, directed by Carol Reed and starring Alec Guinness. It has recently been adapted into a play by Clive Francis which premiered at the Yvonne Arnaud Theatre Guildford on the 23rd August 2007.