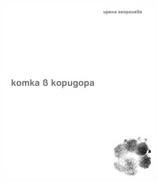 Cat in the Hallway

Despite all its disadvantages Sofia is also one secretive and intimate city. With its buildings, benches, doves and cats, car alarms, secret sexshops, with the rails of the trams and the tiny sleepy streets in Sunday afternoon. “Cat in the Hallway” is a sincere, snug and a little bit hurt poetry about all these things.

Categories
Poetry
About the Author

Irena Georgieva was a managing editor and later an editor-in-chief at the the weekly “One week in Sofia” free magazine. Now she is a contributor at the same magazine.

In 2007, during the “Mediamixx” festival in Albena, she has been awarded with the special award “The Most Talented Young Journalist Of The Year”.

In 2007 also is published her first book with poetry and author's photos - “A Cat in the Hallway”.

Cat in the Hallway
Irena Georgieva

The Garden of Expectations and the Opposite Door
Kristin Dimitrova

How to Paint the Portrait of a Bird
Jacques Prévert