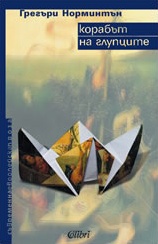 The Ship of Fools

This is the literary debut of 25-year-old British actor-writer Gregory Normington. Critics call it the best piece ever written on the Middle Ages after "The Name of the Rose" by Umberto Eco. Inspired by the famous painting by Bosch, Normington created a marsterful post-modern mosaic.

Gregory Norminton is a novelist and environmental activist born at Ascot, Berkshire, in 1976.

He read English at Regent's Park College, Oxford and studied acting at the London Academy of Music and Dramatic Art.

He contributed The Soul Surgeons to the anthology, Book of Voices (Durham: Flame Books, 2005), sold to raise funds for Sierra Leone PEN. He took part in Planet Action, an eco-reality series made by the global television network Animal Planet in conjunction with the WWF. Norminton has been writer in residence at Wellington College, Berkshire and Magdalene College, Cambridge and he was a featured artist at the 2003 International Writing Program at the University of Iowa. He received a Writer’s Award from the Arts Council of England in 2003, and a Making Waves award from the BBC at the Brighton Festival in 2000.