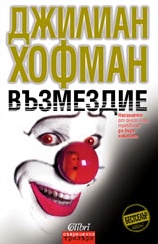 Retribution, a 2004 legal thriller, is the first novel by Jilliane Hoffman. After being published in January 2004 it became a top-three bestseller in the USA and top 10 in Europe. This graphic serial killer/courtroom thriller puts its readers in a situation of choice between justice and retribution in its hardest form.

One rainy night in New York City, outstanding law student Chloe Larson wakes from a terrible nightmare. However, it is not a nightmare - she is savagely violated in her own bedroom. Twelve years later she is forging a formidable reputation as an attorney and a vicious serial killer is on the loose. Chloe recognizes her violator... What happens when the victim turns into a judge?

Jilliane Hoffman is an American writer of legal thrillers. She was born on Long Island and attended both undergraduate and law school at St. John's University in Queens, New York.

Before starting to write Hoffman experienced the true life of a lawyer while working as an assistant state's attorney prosecuting felonies in Florida from 1992 to 1996. From 1996 to 2001, she was a regional advisor for the Florida Department of Law Enforcement consulting with special agents in complicated investigations including homicide, drugs and organized crime.

With the knowledge obtained through years of work as a lawyer, Hoffman turned to writing legal/crime thrillers. Her first novel, Retribution, was published in 2004, followed by Last Witness in 2005. Her third book, Plea of Insanity, is scheduled for release in March 2007. She lives in South Florida with her husband and two children.