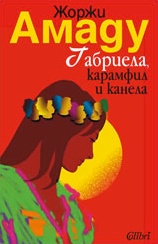 Gabriela, Cravo y Canela (Gabriela, Clove and Cinnamon) is a Brazilian Modernist novel. It was written by Jorge Amado in 1958. It is widely considered one of his finest works.

The story begins in 1925 in the provincial port of Ilheus in Brazil's north-central state of Bahia. Ilheus served as an important point for the distribution and export of cacao, the region's primary product and a topic of much discussion in "Gabriela."

The book tells two separate but related tales: first, the romance between Nacib Saad, a respectable bar owner of Syrian origin, and Gabriela, an innocent and captivating migrant worker from the impoverished interior, and second, the political struggle between the old guard of landed Cacao growers, led by the Bastos clan, and the forces of modernization, in the person of Mundinho Falcao, a wealthy young man from São Paulo.

It can be read simultaneously as an unusual, charming love story, a description of the political and social forces at work in 1920s Brazil, a somewhat satirical depiction of Latin American aspirations to "modernity," and a celebration of the local culture and pleasures of Bahia. Jean-Paul Sartre, a friend of Amado's, called it "the best example of folk novel."