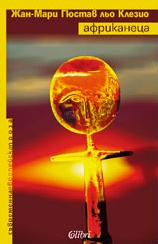 In writing "L’Africain" (The African) Le Clézio reflects on his childhood in 1948 when he was 8 years old. According to the publisher he left Nice with his mother and brother to meet his father who was a doctor in Nigeria. His father remained there during the war but was too far away from the wife he loved and too far away from their two children (he had not seen either of these children growing up). In this short book Le Clézio remembers his father, who was a “jungle doctor” first in Guyana and then in Cameroon and Nigeria. Here you can find Le Clézio's thoughts about his African childhood and about life in remote places. "L’Africain", the story of the author’s father, is at once a reconstruction, a vindication, and the recollection of a boy who lived in the shadow of a stranger he was obliged to love. He remembers through the landscape: Africa tells him who he was when he experienced the family’s reunion after the separation during the war years. The author may seem to be honouring the father from whom he was separated.

Le Clézio has been writing since the age of seven; his first work was a book about the sea. He achieved very early success at age 23 when his first novel "Le Procès-Verbal" ("The Interrogation") earned him the Prix Renaudot and was shortlisted for the Prix Goncourt. Since then he has published more than thirty-six books, including short stories, novels, essays, two translations on the subject of Native American mythology, and several children's books.

From 1963 to 1975, Le Clézio explored themes such as insanity, language, and writing. He devoted himself to formal experimentation in the wake of such contemporaries as Georges Perec or Michel Butor. His persona was that of an innovator and a rebel, for which he was praised by Michel Foucault and Gilles Deleuze.

During the late 1970s, Le Clézio's style changed drastically; he abandoned experimentation, and the mood of his novels became less tormented as he used themes like childhood, adolescence, and traveling, which attracted a broader, more popular audience. In 1980, Le Clézio was the first winner of the newly created Grand Prix Paul Morand, awarded by the Académie Française, for his novel "Désert". In 1994, a survey conducted by the French literary magazine Lire showed that 13 percent of the readers considered him to be the greatest living French language writer.