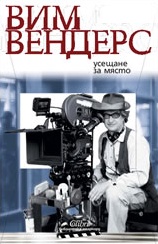 A Sense of Place

The remarkble essey-like writing style of Wim Wenders reveals his passion to traveling and photography. He shares his hopes and expectations of the new digital technologies that make their way in the movie-making - from the change of the filming, through the doubtless advantages of the DVD to the future projection in the cinemas. In this notable book Wenders doesn't hide his political preferencies poured in polemical texts about the American politics and the ghost of Hitler in the German society.

Ernst Wilhelm ("Wim") Wenders (born August 14, 1945 in Düsseldorf) is a German film director, photographer, author and producer. He received the Palme d'Or at the Cannes Film Festival in 1984 for his movie "Paris, Texas", and was awarded honorary doctorates at the Sorbonne in Paris in 1989 and at the Université Catholique de Louvain, Belgium in 2005. He was awarded the Leopard of honour at the Locarno International Film Festival in 2005.

Much of the cinematography in his movies was as a result of a highly productive collaboration with cinematographer Robby Muller. He also worked with the famous writer Peter Handke, adapting his book The Goalkeeper's Fear of the Penalty Kick for his first movie and then collaborating in one of his most famous movies Wings of Desire.