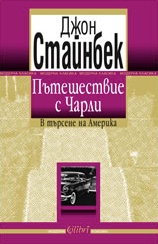 Travels with Charley: In Search of America is a travelogue by American author John Steinbeck. It documents the road trip he took with his poodle Charley around the United States in 1960. He wrote that he was moved by a desire to see his country on a personal level, since he made his living writing about it. He had many questions going into his journey, the main one being "What are Americans like today". However, he found that the "new America" did not live up to his expectations.

According to Thom Steinbeck, the author's older son, the real reason for the trip was that Steinbeck knew he was dying and wanted to see his country one last time. He was surprised that his stepmother allowed Steinbeck to make the trip.

Steinbeck traveled throughout the United States in a specially made camper which he named "Rocinante" after the horse of Don Quixote. He started his travels in Long Island, New York roughly following the outer border of the United States, from Maine to the Pacific Northwest, down into his native Salinas Valley in California, across to Texas, up through the Deep South, and then back to New York, a trip encompassing nearly 10,000 miles.