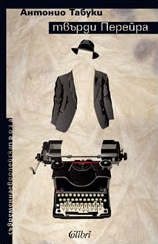 Portugal 1938. Pereira is the editor of the culture section of the Lisboa, an unaffiliated evening paper. There is civil war in Spain and the fascists are in power in Portugal, but he concerns himself only with his work (writing biographies of famous writers and translating French novels) and ignores what is going on around him. He hires Monteiro Rossi, an idealistic young man in love with a beautiful communist, as an assistant. He reluctantly helps them when they begin to get into trouble due to subversive activities. Eventually events force him to take a stand.

Antonio Tabucchi (born on September 23, 1943) is an Italian writer and academic who teaches Portuguese language and literature at the University of Siena, Italy.

Deeply in love with Portugal, he is an expert, critic and translator of the works of the writer Fernando Pessoa from whom he drew the conceptions of saudade, of fiction and of the heteronomouses. Tabucchi was first introduced to Pessoa's works in the 1960s when attending the Sorbonne. He was so charmed that, back in Italy, he attended a course of Portuguese language for a better comprehension of the poet.

His books and essays have been translated in 18 countries, including Japan. Together with his wife, María José de Lancastre, he translated into Italian many works by Pessoa into Italian and has written a book of essays and a comedy about the writer.

Tabucchi was awarded the French prize "Médicis étranger" for "Nocturne indien" (Notturno indiano) and the premio Campiello, and the Aristeion Prize for "Sostiene Pereira".