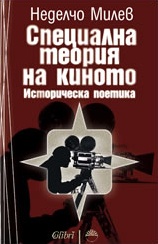 This is the third volume of a general history of cinema in five volumes.

Categories
Cinema
About the Author

Prof. Nedelcho Milev is a Bulgarian cinema critic and cinema theoretician, one of the founders of the Cinema Department at the National Theatre Academy. He has written numerous books on history and theory of the cinema, including "The Road Towards Psycho-Physical Monologue in Cinema", "The Bulgarian Historical Film", "The Drama Screen (An Attempt for General Theory of Cinema)", "Special Theory of Cinema: Historical Poetry".